It’s National Butcher’s Week from 14th – 20th March and we are celebrating by reducing all of our Welsh Wagyu Beef “Secret Steaks” by 20% !!   These are cuts that are often only familiar to butchers and chefs, but which, with careful handling, will produce the most amazing results for your dining table. 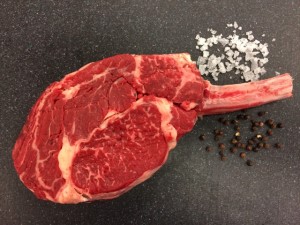 The Delmonico is actually from the end of the rib – and this wonderful steak/chop will serve two easily, weighing about 700g in total.    There again, ONE hungry man can also dispatch his own Delmonico with little or no incentive necessary!

When Diane, our Operations Manager, spotted this recipe she couldn’t believe her luck.   Here was a perfect opportunity to combine two of our products and try out a new recipe …. and if it worked, we could try combining the products on one of our Something Special for the Weekend Special Offers …

The recipe is quite simple, which is why we like it.  Open up the escallops and place the veal mince in a bowl ready to mix in the ingredients for the stuffing.  We used mixed fresh herbs – parsley, thyme and oregano, and we softened some garlic and shallots gently before adding those to the mix, along with a beaten egg to help the mix to bind together. 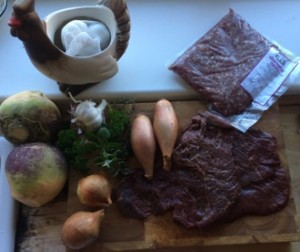 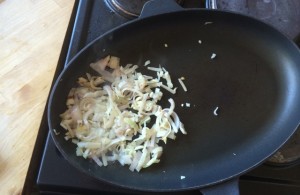 Once the stuffing is nicely mixed you can begin to stuff the escallops, flattening some of the stuffing into the centre of the piece of meat and then rolling it up and securing with a skewer.

In fact, when Rachel tried this recipe she didn’t secure the escallop and when it cooked it seemed to be perfectly formed into a roll.  I was not quite so confident and used the skewers as shown below. 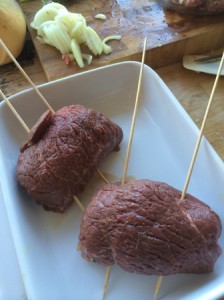 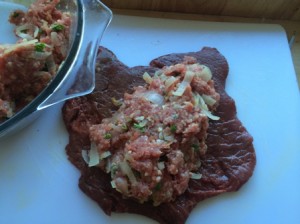 Finally I made an onion gravy … A little secret just between us, I fried some onions in the same pan and simply added a mix of gravy granules, water and a stock cube.(sssh!)  There was some extra stuffing left over and so I used that up in some cabbage leaves which added nice colour to the dish …. This was placed in a preheated oven at 180 degrees C for about 40 minutes … nice and slow braising produced a stunning, melt in the mouth and very flavoursome dish.   In retrospect I would cover with foil, at the time I just kept basting with the gravy. 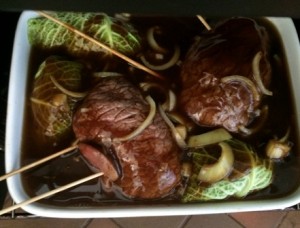 As promised, we’re keeping you abreast of our latest Something For The Weekend special offer ….and this is a real bargain …

Use this opportunity to make up some lovely casseroles and stews for those crisp autumn days – or just grab your chance to stock up your freezer before the colder months come along!  Why don’t you tell us your favourite veal casserole recipe? 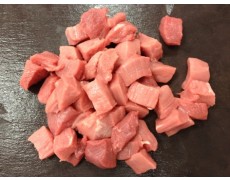 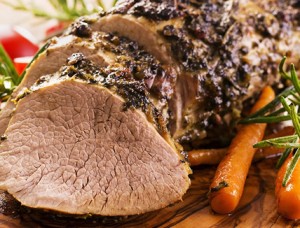 Each weekend we like to make a special offer available on our website and we send a mailshot we’ve called “Something for the Weekend” to let you know ….. If you sign up on the website you will receive this automatically.  We will also feature the offer here in our Taste Buds pages in case you miss it ……

“SOMETHING FOR THE WEEKEND”

A great opportunity to stock up your freezer
ROSE VEAL SILVERSIDE ROASTING JOINTS
USE ONE, FREEZE ONE

Check out the chalkboard on our website www.alternativemeats.co.uk where you will find regular special offers on our wonderful products !